MARINA MARINA: there are few songs that have been recorded so often, played so often and printed so often as MARINA. There are thousand of versions and even the composer –singer of the song can only guess. Famous names among the interpreters: Dean Martin, our beloved Dino, Flaco Jimenez, Catarina Valente, Marino Marini, Celia Cruz, Perez Prado, Chico and the Gypsies, Dalida, Toots Thielemans, André Rieu etc etc... 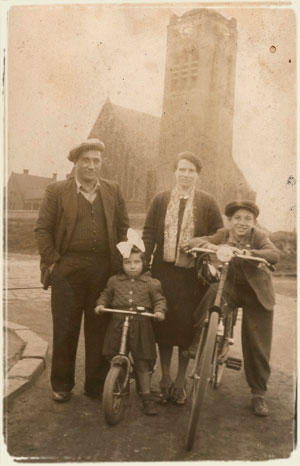 I bet that if you ask any street musician on any corner of the world to sing or play for you MARINA, soon you will hear the famous first notes! It is sung in every language of the civilised world and can be heard in every continent. This year the song will be 50 years old but remains fresh, young and uncomplicated, simple melody composed by a young Calabrese miner’s son : Rocco Granata. When he was ten years old he left sunny Calabria for the cold Belgian mining district. His father intended to work some years in Belgium and to return to Italy. But Salvatore felt so lonely in Belgium and sent for his family, his wife Ida and his two young children Rocco and Wanda.

So his ten year old son Rocco, who was born August 16th 1938 in Figline Vegliaturo, Calabria would go to school in Belgium and continue the solfège lessons he had started in Italy. At the age of fifteen his father allows him to skip school and he starts working as a mechanic in a Vespa-shop. Vespa and Italian engines generally interest Rocco very much, but music comes first. During the weekends he plays with the band that he has formed , his combo: ‘The International Quintet’ in which at the beginning he only plays accordion. Soon he becomes the singer of the band. He starts singing sentimental Italian ballads and one of the songs especially loved by the dancing crowd was ‘MANUELA’.

Rocco –with a little help of his friends- arranged to book a studio and records MANUELA, an old Italian standard that Rocco gave a new profile. But he never thought about the fact that a single record has a B-side. So just before going to the studio and without second thoughts he decided for the song MARINA , an improvisation that he had made during a performance intermission, while the rest of the band went to the bathroom and young Rocco had the stage to himself. The lyrics of the song were not yet finished and in the studio to great annoyance of the sound engineer Rocco had to write some more lines.

He never forgot the reaction of the public when he played the song the first time : he remembered the happy faces and how the song had put smiles on everybody’s face. So he decided MARINA would be the B-side of the single. The rest is history. The road to success though was a bit bumpy at the beginning, as no record company believed in the song and nobody wanted to release it. So Rocco had 300 singles pressed and again with the help of his friends these records were put in the neighbourhood jukeboxes. He was ever so proud to see his name printed on the record label although it was misspelled : Rocco with one C.

All of a sudden everybody wanted to buy that mysterious record that couldn’t be bought anywhere. Now record companies found the way to the little miners house and bid for the rights. Rocco was stubborn – a ‘testa Calabrese’ – and a proud Italian: ‘so you didn’t believe in my song, now you are not getting it’ So he kept the master rights to himself. 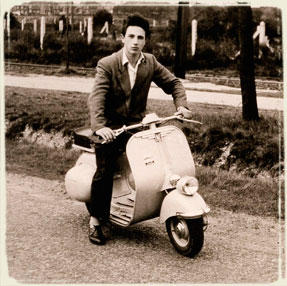 Few months later MARINA skyrocketed up the charts nationally and internationally and all over the world the song that nobody believed in sold more than 100.000.000 times. In the US and Canada the song was released by LAURIE RECORDS of N.Y. and they invited Rocco to famous US Radio- and Television shows. Rocco the slim Italian miner’s son performed in the Mecca of music in Carnegie Hall New York. Rocco recorded an LP in New York, the very first LP in his life with a live orchestra in the studio. LAURIE RECORDS believed in this young artist ‘with a smile in his voice and deft accordion trained fingers’, as they printed on the sleeve of his album. And MARINA, this exceptional tune survived many decades even although it appeared on countless cheaply produced albums, with boring arrangements in faceless productions. When Rocco grabs his accordion and the first notes are thrown into the air the song is young and still put smiles on the audience’s faces. Gifted accordion players have tried to imitate the accordion solo in the song and complain to Rocco ‘I nearly broke my fingers on that solo and I couldn’t play it the way you do’. And Rocco smiles happily. The catchy melody was even picked up by President JF Kennedy, whose cook stated in an anecdote - in between recipes -, that when the president walked into the kitchen he often whistled the song ‘Marina Marina’.

After his performances in New York, Montreal and in Toronto’s Massey Hall Rocco returned to Europe and especially to Germany. He composed, recorded and scored hit after hit. He played in seven musical movies and toured and toured in Europe. In the middle of the sixties Rocco wanted to settle and started his own music publishing company GRANATA MUSIC EDITIONS and his own record company CARDINAL RECORDS and started producing for Belgian artists.

He found joy and fulfilment in this work. But that artistic bug bite again and in 1989 he recorded MARINA again in a new dance style. Same song, same accordion solo, same singer again on top of the charts thirty years later. So Rocco tours again and even tours South America this time.

During two years Rocco had been composing and writing the lyrics for his nostalgic CD, “Paisellu Miu” (My Little Village). He was working with Michele Bisceglia whom he considers one of the most promising musical arrangers in the business and with whom he would work on many future occasions. The final recording of “Paisellu Miu” was made in the Crescendo studio owned by another Italian, Pino Guarraci. 42 musicians were on hand including Custodio Castelo, Amalia Rodriguez’s guitarist, and the world famous jazz musician, Toots Thielemans. Toots labeled Rocco’s song, “Paisellu Miu”, “Italian blues”. “Paisellu Miu” would be the first of a special collection of four CDs in which Rocco put his heart.

“Ricominciamo” (Let’s Start All Over), the second CD in the Quartet series, would be released in 2008. While “Paisellu Miu” was pure nostalgia, “Ricominciamo” was pure passion. Rocco teamed up with the jazz arranger, Alain Van Zeveren and together they selected their favorite musicians for the recording.

During this time at the urging of Stijn Coninx, one of Belgium’s best film directors previously nominated for an Oscar, Rocco began to write his autobiography, “My Life”. Rocco’s book went into a second edition and the movie, “Marina” based on this book and directed by Stijn premiered in 2013. The cast included two powerful Italian actors and the debut of a young Belgian actor, Matteo Simoni, in the role of Rocco. And of course the musical composer was who else but Michele Bisceglia.

Despite all the excitement of the film production, Rocco’s true home and heart is in the recording studio. He returned to the studio to record the third CD in the series with one of Belgium’s best DJs, Buscemi. “Rocco con Buscemi” is a bit of lounge, a dash of Bossa Nova and melancholy mixed with joy, all with an Italian twist. It is a swinging tribute to Renato Carosone, the Italian composer and musical director who was one of the first to believe in “Marina” back in 1959.

On the final CD of the Quartet, “Argentina”, Rocco chose to work with Enrique Noviello and the Argentinean band, Los Authenticos Decadentes. Dozens of “professional” Argentinean street musicians came from all corners of the earth to help Rocco and Noviello create the happy sound of Argentina.

In 2013 CNR Records released a double CD and DVD, “The Best of Rocco Granata”. Rocco decided to stop touring in 2014 and will mark this decision with several fall performances including his favorite musicians and directed by Michele Bisceglia.

The film, “Marina” lives its own life. It has been released in 16 countries and boasts numerous awards.

Next to composing Rocco finds the best relaxation in playing golf. Like everything he does in life he wants to win, so to those who are interested : Rocco’s handicap at the moment is hcp 11, due to his busy program he had not enough time to play but he has been hcp.7,9. 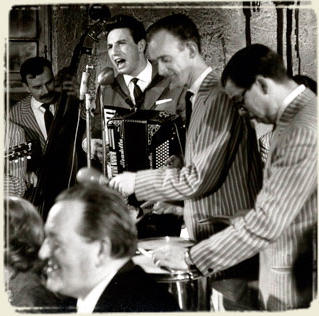 Although Rocco has known great success in life he remained ‘just Rocco’. He visits his native village Figline Vegliaturo once in a while and enjoys to take long walks late in the evenings when everybody is inside and people don’t stop him all the time inviting him to have a drink or a cup of coffee or a plate of pasta. He doesn’t want to offend anybody by refusing and enjoys reviving the happy memories all by himself.

Like many emigrants his parents Salvatore and Ida never made it back to Figline, they remained in Belgium for their children who build their lives over here under a grey sky. Rocco was their pride and joy and he took good care of them and made up for the family they missed so much. They passed away and still Rocco lies awake at night figuring out if his parents wouldn’t have preferred to be buried in the Italian soil and be put at rest in the shadow of the tall cypresses, in the marble tombstone surrounded by the family that they had to live without for too long.